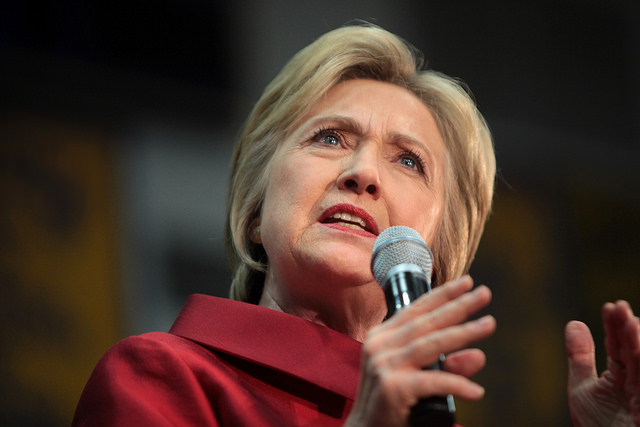 Newsweek: What Clinton Could Do For Gun Control if Elected

Hillary Clinton has spelled out what much of her gun control agenda will be if she is elected - and she hasn't toned down her rhetoric as the campaign comes to a close. That's what has changed, Newsweek claims, between 2012 and 2016. Advocating for stricter gun control laws isn't seen as the political liability it was in the past.

In speeches, Clinton says she plans to start with issues on which (she thinks) there is broad consensus, such as no fly/no buy and expanded background checks. If Republicans hold Congress, she will likely be unable to pass her agenda legislatively and will have to focus on executive actions and her power to appoint government officials like judges and heads of regulatory agencies.

Clinton has also committed to building on the executive actions President Barack Obama announced in 2013 and earlier this year, which included exploring and promoting new gun safety technology and hiring more than 230 FBI agents to process background checks. And she wants to crack down on gun companies linked to criminal activities, including repealing the federal law that shields gun companies from legal action—a measure she repeatedly slammed Democratic primary rival Bernie Sanders for supporting. “It’s a civil rights issue, and I will do everything I can—legislation, regulation, litigation—because I think we have veered off the track,” Clinton told The Chicago Defender over the summer.

As long as the GOP holds the House, though, Clinton isn’t likely to move any substantive gun legislation through Congress. Republicans on Capitol Hill have already signaled they aim to be a roadblock to virtually all of her agenda if she’s elected, and Representatives Jim Jordan of Ohio and Jason Chaffetz of Utah, to name just two, are promising to continue investigating her use of a private email server as secretary of state. Some Republicans are even talking publicly about the possibility of holding impeachment hearings.

Even if the Democrats take over the Senate, it doesn’t guarantee Clinton success in carrying out her gun policy to-do list. As a minority, Republicans could still be a high barrier to action for her as president. “Nothing will happen on gun control,” a Senate Republican aide predicts to Newsweek via email, requesting not to be identified in order to speak candidly. If the GOP does lose the Senate, the aide notes, Democrats are unlikely to be able to cobble together the 60 votes necessary to overcome a filibuster on any gun measures. And if they go so far as to gut the Senate’s filibuster rules? “Even then, nothing will pass the House unless Dems win that, too,” the aide says. And the odds are against that kind of electoral wave this year.

She also would have few executive branch options. Obama has already pushed the limits of executive authority on guns, and while Clinton could “do some symbolic things,” says Loyola Law School professor Allan Ides, she independently wouldn’t be able to “do anything of significance.” Any strictures on the right to bear arms, he adds, would trigger a lawsuit and ultimately be tested in court.

Hope for change on guns rests largely on Clinton’s power to appoint government officials—and in particular on nominating a replacement for the late Supreme Court Justice Antonin Scalia. What the gun lobby and its allies fear most about a Clinton White House is that she will appoint, in National Rifle Association spokeswoman Jennifer Baker’s words, an “anti-gun Supreme Court justice.” That could spell doom for the court’s groundbreaking 5-4 decision in District of Columbia v. Heller. Penned by Scalia, the decision in that 2008 landmark case recognized for the first time the individual right of average citizens to own handguns for self-protection. Gun advocates see Heller as a legal roadblock to potential firearms restrictions at any level of government. But with a Clinton nominee, there might be a motion to overturn the outcome.

Representative Elizabeth Esty of Connecticut also notes that Clinton could appoint new leaders at the Bureau of Alcohol, Tobacco and Firearms and the Centers for Disease Control and Prevention who could challenge the interpretation of the Dickey Amendment, which limits gun violence research.