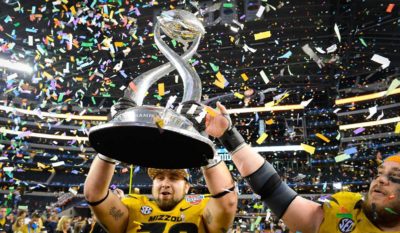 On an SEC conference call Wednesday, Missouri head football coach Barry Odom announced that players are not allowed to legally own a gun while a member of the team.

Missouri head coach Barry Odom says his players are prohibited to legally own a handgun while they are a member of the Tigers football team.

Other SEC coaches on the call discussed their team's policy on guns. Many cited university policies against possessing weapons on campus, but a few showed a blatant disregard for their players' Second Amendment rights.

Vanderbilt coach Derek Mason on his players owning handguns: “I truly believe there isn’t a need for it.” Says he makes that point clearly.

Kentucky head coach Mark Stoops says he has team policy that his players aren’t allowed to own a handgun, even with legal permit.

So, Coach Stoops and Coach Mason: what other fundamental, individual rights do you force these unpaid players to abandon in order for them to make your respective schools millions of dollars playing football?

Are they banned from speaking out on political issues?

Can they go to a church, temple, or mosque to worship?

Can they put passwords on their computers and phones to protect their privacy?

Shortly after Stevens published his series of tweets, Firearms Policy Coalition announced on Twitter that FPC and Firearms Policy Foundation are investigating the potential violation(s) of civil rights in firearm policies at the University of Missouri and other public institutions:

Coach Odom "clarified" his statements Thursday morning through a university spokesperson, stating that university policy does not prohibit a player from legally possessing a firearm.

A request for public records was sent to the University of Missouri from the Firearms Policy Foundation by email and fax late Wednesday night. Similar requests are being sent to other public universities to "research and evaluate the university's firearm-related policies for civil rights matters and public education purposes."