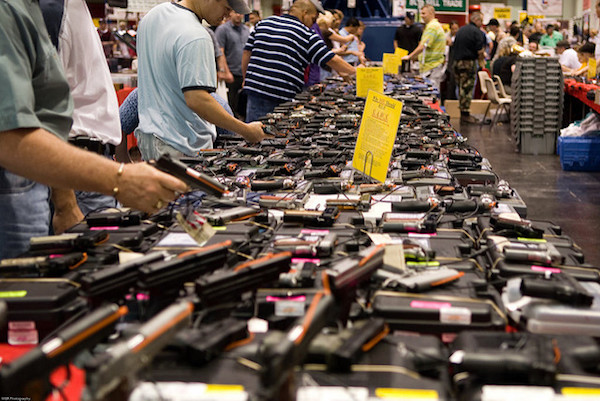 Agents had hoped to identify gun smugglers; however, the methods they used conflict with privacy rights of law-abiding gun owners. Some fear that the data collected could be utilized to create a gun owners' database. Via the Wall Street Journal:

In an email titled “Request for Assistance,” an ICE investigator wrote, “We would like to see if you can support an outbound guns/ammo operation on (redacted) at the Crossroads (Del Mar) Gun Show. We would like to deploy license plate readers.” The email, whose sender and recipient are redacted, includes a large section of operational details that are also redacted.

The law-enforcement officials with knowledge of the operation confirmed ICE got local police officers to drive around the parking lot at the gun show and use their license-plate readers to collect all of the cars’ information. A spokeswoman for the San Diego County Sheriff’s Office declined to comment on whether the department took part in the activity.

Bob Templeton, the CEO of Crossroads of the West, which puts on the gun show, said he knew local police had been at the show, but was surprised to learn that federal agents had been gathering data about customers. The show at the Del Mar Fairgrounds typically draws 6,000 to 9,000 customers, meaning thousands of cars are in the parking lot, he said.

“It’s obviously intrusive and an activity that hasn’t proven to have any legitimate law-enforcement purpose,” said Mr. Templeton. “I think my customers would be resentful of having been the target of that kind of surveillance.”

Other emails show ICE agents planned to keep scanning license plates at other gun shows in Southern California, though agency officials said they couldn't confirm whether they had done so.

A June 30, 2010, email from an ICE agent lists a series of gun shows that summer, including ones in nearby Ontario and Costa Mesa, noting that “the last (only) one worked out pretty well, so I’d like to send two or three to that one as well.”