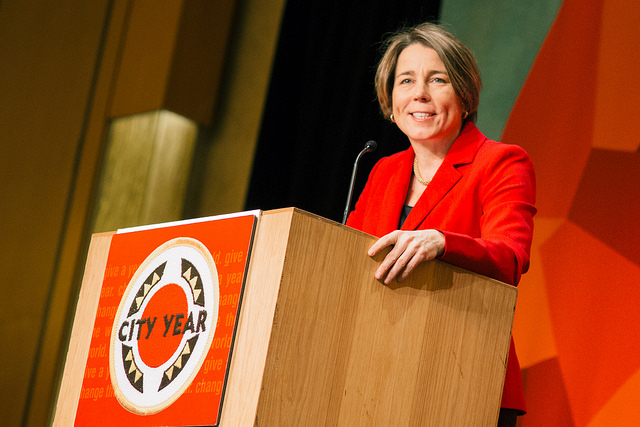 Since Massachusetts AG Maura Healey unilaterally expanded the state's Assault Weapons Ban in July, she's received great praise from gun control advocates and (well-deserved) scorn from Second Amendment advocates in the state and nationwide. Her actions are now being challenged in court, but Healey is doubling down on her position that she is merely enforcing the law as it was written (nevermind that it was interpreted in an entirely different way for 30 years).

From the Eagle Tribune:

Healey unilaterally expanded the state's 30-year ban on assault weapons in July to include "copycat" weapons that look like or can be modified to mimic assault weapons. More than 10,000 such weapons were sold in the state last year, she said.

Healey also has used her powers under the state’s consumer protection law to demand that gun makers, specifically Remington and Glock, turn over documents related to complaints about safety, including accidental discharges, lawsuits and legal settlements.

"We have a moral and legal responsibility to ensure that combat-style weapons are off our streets and out of the hands of those who would use them to kill innocent people," said Healey, a Democrat, in an interview. "The gun makers were finding a way around the ban. We put a stop to that."

Not surprisingly, gun rights advocates are pushing back, with some calling Healey's actions an "abuse of power."

"She has essentially made tens of thousands of law-abiding citizens felons in waiting," said Jim Wallace, executive director of the Gun Owners’ Action League, the Massachusetts affiliate of the National Rifle Association. "She's abusing the powers of her office for political gain."

Wallace said the new rules have caused confusion among gun owners, many of whom are worried about being prosecuted. A list of banned rifle features and modifications released by Healey's office includes parts that are interchangeable with banned weapons, such as trigger assemblies and magazine ports.

The National Shooting Sports Foundation, a gun lobbying group, filed a lawsuit over the new rules in federal court. The National Rifle Association is also expected to challenge Healey's order, either by signing onto the existing case or filing a separate lawsuit.

Healey defends the actions, saying the assault weapons ban gives her office the authority to impose new regulations to enforce the law.

She said Congress has "given into the gun lobby" by prohibiting gun manufacturers from being prosecuted for deaths related to safety defects and homicides, and for blocking funding for the U.S. Centers for Disease Control and Prevention to study the effects of gun violence.

"Gun manufacturers are the only maker of a consumer product that have immunity from liability," she said. "That's really unfortunate."

Gun rights advocates point out that the FBI statistics show most gun-related homicides are committed with handguns, not the kind of weapons targeted by Healey.

"If she really wants to crack down on gun violence, she should be going after the illegal gun trade, not law-abiding citizens," said Rep. Lenny Mirra, R-West Newbury, one of 80 legislators who signed a letter blasting her actions.

Healey, who oversaw more than 250 lawyers in the office's civil rights division before she was elected attorney general, created friction with Gov. Charlie Baker by expanding the assault weapons ban. The Republican governor took office with Healey in 2015.

Baker, who supports the ban, sent a letter to Healey in July requesting that her office clarify its unilateral action on "copy-cat" weapons and what it meant for "responsible gun owners" who purchased the weapons legally.

"Keeping dangerous weapons out of the hands of those who wish to do others harm is a priority we share," Baker wrote. "At the same time, protecting from prosecution responsible gun owners who followed the rules in the past and ensuring there is clarity when it comes to enforcing gun control measures such as the assault weapons ban are essential to fair application of the law."

"If the gun lobby wants to change the law, they can go to the Legislature," she said. "But the law is the law, and it's my job to enforce it."