The August 31, 2016 teleconference between numerous sports writers and the men’s football head coaches for Southeastern Conference (SEC) universities should have been about, well, football. Maybe even the upcoming season opener, or how they’ve improved their respective teams over the off season.

Instead, the topic that made headlines was gun control and whether or not the coaches allowed their student-athlete players to own or carry guns.

During the recorded call, sports writer Matthew Stevens posed essentially the same question to each coach, asking them if they had any gun-related policies.

“Beyond, obviously, a campus restriction on the issue, or even hunting can be a separate issue, I’m curious if you have a team policy on your players legally owning a handgun?”

During the call, a number of coaches stated that they have some kind of a ‘no guns’ rule for their players, and Stevens live-Tweeted their replies.

That same day, we became aware of the issue and immediately went to work sending letters to a number of the public universities in the conference, requesting their weapons policies and other related records.

Here’s what we asked for:

1. A copy all records that are, relate, refer to the current policies, practices, or position of the [University] on firearm acquisition, possession, storage, carry, transfer, or disposition.

2. A copy all records that are, relate, refer to…the current policies and practices of any [University] sports program policy or position on handgun acquisition, possession, storage, carry, transfer, or disposition.

3. A copy all records that are, relate, refer to…the current policies and practices of any [University] men’s football program “team policy” on handgun acquisition, possession, storage, carry, transfer, or disposition.

We’ve since received the respective university's responses to our requests, and the records show that some coaches were either flat wrong about their school policies…or flat-out lying.

Let’s compare the coaches’ statements with official university policy. [Any emphasis in the quotes below is added.] (A complete docket of the records we’ve received so far are at this link.)

We’ll start with University of Kentucky (UK) men’s football coach Mark Stoops, who was asked about players owning a handgun:

“They – we do not allow any handguns. I have made it very clear to them that I do not want them owning a handgun, even if they have a legal permit. And they obviously can never have a handgun on campus.

But, you know, I make it my policy to tell them no guns, and come explain to me why they may need a gun. Because we definitely should not need a gun living in Lexington, Kentucky. So that’s my policy.”

UK’s official policy bans guns on campus, but does make a few exceptions, including this one:

“Possession of a deadly weapon by a person licensed to carry a concealed deadly weapon pursuant to KRS 237.110, if the firearm or other deadly weapon is contained in a motor vehicle (private or University owned) and is not removed from the vehicle (KRS 527.020(4) and 237.110(17)).”

None of the UK policy documents provided to Firearms Policy Foundation prohibit the ownership of a gun – nor could they. And, notably, the University told us that none of their athletic department’s sports teams have a different policy than the one they provided.

Next up is Mississippi State coach Dan Mullen, who was also asked about his players legally owning a firearm, and replied:

“We have a ‘no weapons’ policy on the team that, you know, I don’t think there’s any need for our guys to carry weapons.”

But Mississippi State’s actual policy only applies to students while they’re on University property:

“No University student or employee, unless a duly authorized law enforcement official or authorized by the [University] President, may possess firearms on University property, including University vehicles, regardless of the possession of any kind of firearms permit.”

Again, the reality is that Mississippi State doesn’t have a complete “no weapons policy” – even for their student-athletes.

Any law-abiding Mississippi State student – even one that plays sports – who can legally possess or carry a handgun under state and federal law can do just that….just not at school.

“Campus carry” has been a hot topic in Texas this year, and public universities in the Lone Star State now have some of the least restrictive gun policies in the country.

But Texas A&M head coach Kevin Sumlin threw an incomplete pass when he talked about his school’s gun laws during the SEC teleconference:

“You know, there’s been new, obviously new legislation passed in the state of Texas that we have to abide by legally. But we’ve had a no handgun rule on our team since we’ve been here.”

Despite Coach Sumlin’s statement that they “have to abide by [the state statutes] legally,” he rather amusingly went on to contradict himself.

Apparently, everything really is bigger in Texas….including bad ideas and inaccurate statements made by Coach Sumlin.

Mizzou Coach Barry Odom, in a way, lit the proverbial wildfire of this issue when his response to Stevens about his gun policies quickly became a national story.

News outlets like Fox Sports and Breitbart, nationally-syndicated commentators like Dana Loesch, and even football discussion forums all covered his remarks.

When Stevens asked Odom to describe his team policy for carrying a gun outside of any campus-wide restrictions, he said:

“Yeah, you’ve gotta...make sure, you know, with the rules and you know, within -- you mentioned hunting and some things like that. But if there’s a handgun issue, then we deal with it. And, you know, not, not allowed in the program.”

Because Stevens’ coverage of Odom’s statement had caused such a national hubbub, by the next morning the University was in full PR panic mode, issuing a statement “clarifying” what Coach Odom meant. 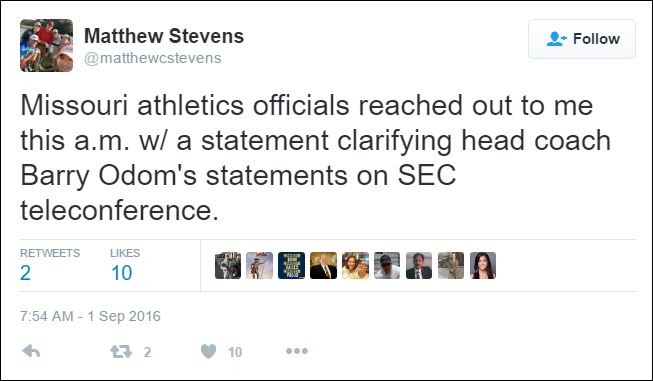 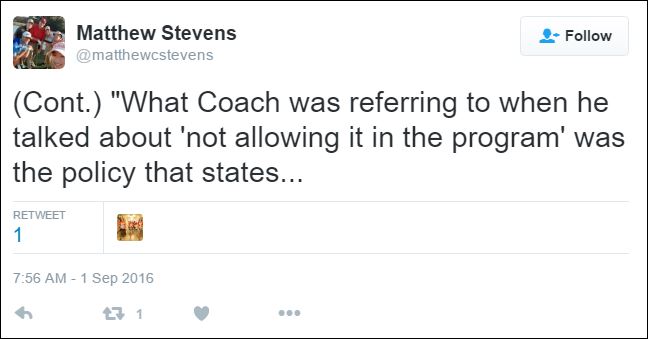 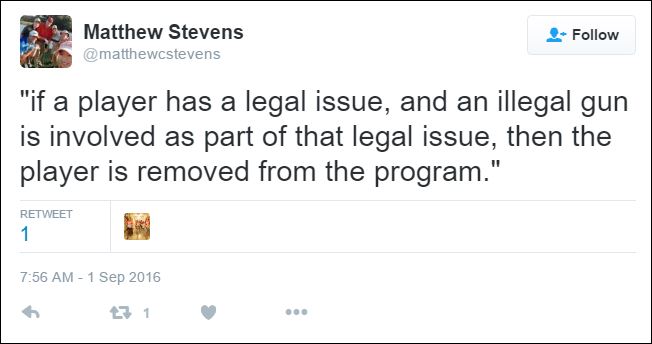 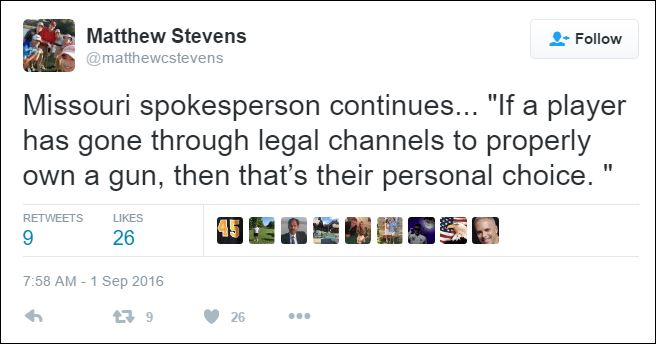 “Firearms are not permitted on campus, even in vehicles.”

But, student-athletes are also expected to abide by the Athletic Department’s Code of Conduct. That document’s section on firearms states:

“The possession of any firearm is strictly prohibited. Violation of this policy will result in disciplinary action up to and including dismissal from the team and loss of athletics related financial aid.”

At least one student-athlete has questioned this policy’s infringement of Second Amendment rights. In an August 11, 2016 email that was provided to FPF as part of the University’s response to our request, the unidentified student questioned the provision as follows:

"Hi Bob. I have a couple questions regarding the MU Code of Conduct. On page 2, there is a section that talks about firearms and how the possession of firearms is strictly prohibited. How is the school able to deny a student athlete's 2nd amendment right while living off campus and wouldn't have the firearm on the campus? A normal student living off campus is allowed to have a firearm, so why is a student athlete denied their 2nd amendment right while a normal student can still have their rights while living off campus?"

On August 12, Sarah K. Reesman, the Executive Associate Athletics Director for the University of Missouri, offered this response:

While Reesman’s clarification is enlightening, it is still not the official written policy and the University should immediately correct this glaring issue. We’ll definitely be following up with them on it.

A student-athlete, like any other law-abiding adult in the U.S., has the fundamental, individual right to keep and bear arms for self-defense.

Stoops believes that people in Lexington, Kentucky don’t need guns for self-defense. Thankfully, we have a Bill of Rights, not a "Bill of Needs" or a "Bill of Wants."

While he’s employed at UK, which has an excellent law school, Coach Stoops might want to take a class or two on how the Constitution works, and the difference between enshrined “negative rights” and “football coach policy preferences.”

Stoops might also want to step outside of his $1.45 Million, nearly 9,000-square-foot stone upper-class fortress of a house and read the local paper.

According to crime data published at neighborhoodscout.com, Lexington, Kentucky has a higher violent crime rate than the rest of the state (3.42 violent crimes per 1,000 people vs. 2.12) and more crimes per square mile than the national average (which includes known hotbeds of crime like Chicago, Los Angeles, New York, Baltimore, and Detroit).

(As a consolation prize, perhaps, for Coach Stoops, Lexington is safer than the progressive anti-gun Mecca of San Francisco, CA.) 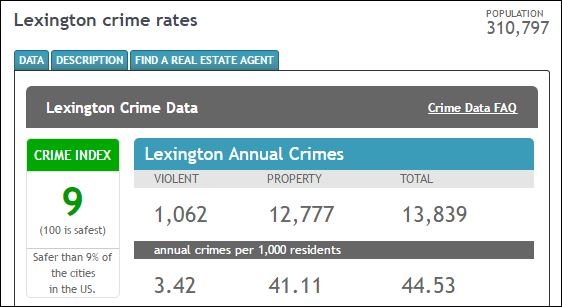 Ultimately, however, it’s not up to Coach Stoops – or any other coach or government official – to determine the fundamental rights a student-athlete needs.

That’s why, following our investigation into these schools, we sent the University of Kentucky a legal demand letter to put them on notice and make sure that Coach Stoops – and every other University coach – isn’t preventing law-abiding people from exercising their Second Amendment rights.

And we’re also following up with other institutions, like Texas A&M, to make sure they know their employees might be breaking the law – and their own university policies.

Is There a Problem At Your School? Let Us Know!

If you’re a law-abiding student at any public college or university in the United States and think your school (or coach) has an unconstitutional policy or practice that separates you from your Second Amendment rights, please do let us know by sending us a message here.

Now that we have the SEC pretty much wrapped up, Firearms Policy Foundation’s team of researchers, policy experts, and lawyers will broaden the investigation and take a hard look at the gun control policies of other public colleges and universities around the country.